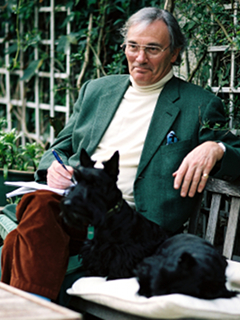 Martin Best is the founding partner of The Corporate Theatre.

Martin attended the Guildhall School of Music and Drama, the Royal College of Music (where he studied for a year with the guitarist John Williams), and the University of Leeds, where he gained an MA in English by research into Shakespeare’s treatment of medieval ideas of love and music.

His career as a musician, actor, and creator of programmes has taken him all over the world, playing and singing the songs he loves, telling the stories that enthral him, and writing and composing music for theatre, radio and television.

His formative years were spent with the Royal Shakespeare Company as lutenist, guitarist, actor, composer, and deviser of recitals, collaborating with many of the greatest names in English theatre. Following this, he embarked on a life on the road, touring America, Europe, and Australasia, and appearing at the festivals of Edinburgh, Aldeburgh, Bath and London. He became deeply involved with Swedish music and theatre for over 25 years. During these years he held a number of appointments at universities in the United States including at the University of California, Oberlin, and Dartmouth. He is now a lecturer in Shakespeare studies for the University of Cambridge’s Institute of Continuing Education.

Martin has won the International Edison Award for his recordings of medieval troubadour songs and poems; his recording of a medieval Christmas received the Gramophone Pick of the Year award; and his work in Sweden won him the Salen prize for outstanding contributions to Swedish sung poetry. He is a Fellow of the Royal Society of Arts as well as a Fellow of the Incorporated Society of Musicians.

What inspires you now?
Part of my vocation is to bring my deep love of my life’s work into areas where they are in short supply. I want to re-ignite awareness of them in large institutions and organizations, where the bleakness of corporate language and the pressure to perform so often suppress the response to the world we live in. In my residences in universities in the USA I started to experiment with groups of students from business, arts, humanities and science. Many of these students are still friends of my family today, and I treasure the remarkable work they did as creators and inspirers of each other and their audiences. The poems and stories they wrote are kept lovingly in my library.

How did you come up with the idea of a theatre – in – business and commerce?
I wanted to spend the second half of my life, if I can put it like that, trying to help people who think they have no creativity realise that they have plenty of it. It started as a summer school, called Musica Humana, which my wife (a qualified teacher of speech and drama and a prize winning stage designer) and I established in a beautiful medieval manor house. Because of my work with the Royal Shakespeare Company’s American US teaching programme, we were able to become connected to the humanities departments of about 6 US universities. We were then lucky enough to receive sponsorship from Volvo, I began to explore how we could stimulate the Volvo leadership with the same approach we were developing on the summer school. It turned out to be a considerable success, partly I think because if you have a musical mind you can make unexpected connections between and within the patterns of organisations and their contexts.

How do you see the connections between businesses and the arts?
I can only say that if all the world’s a stage, then that stage exists in spadefuls in large corporations. The purpose of the corporation is perceived to be to make profits, and money is never far away from the business of art. But the currency of the corporation is not only money wealth. It is in the intellectual, imaginative and spiritual wealth of the people who make it work, and the people who interact with it in society. The way people are, the way they do things, and why they do them, are major concerns of the corporations who employ them, and of the wider community.

The point is, obvious though it may seem, that leaders need to rediscover their empathetic and intuitive side and integrate it with the over-rationalised mind-set we have all developed since the Industrial Age. The point was well made by Chaplin in ‘Modern Times’, and it is in even greater need in today’s economy, which several authorities have described as bringing about a shift in human consciousness.

We are seeing a very rapid shift in the relationships between business, society and brands. Technology has removed so many barriers that it could be said that the only real barriers left are those that people create for themselves. To overcome these, and to reconnect with the real humanity in themselves and those they lead, is the prime job of leaders today.

The role of The Corporate Theatre now is to help people remove these barriers to growth, by developing the capacity of people to inspire – and to be inspired – on four or five distinct but related levels. We have created an approach that simplifies the complexity that might otherwise get in the way of success, and we have shown that people can change mind sets and behaviours through the power of inspiration. We do this through a blend of: consultancy; arts & humanities; education & training and business knowledge & psychology.

Where do you think you will go from here?
If the organism of companies, the collective intelligence and inspirational human capacity of the people who live and work in them, are all growing the enterprise will grow, innovate and attract. I want to see companies become basic to the human, connected fabric of society. I want them to feel like orchestras, jazz bands, theatres.

My work as the founding partner of The Corporate Theatre is to continually look for new ways of designing how we give advice, execute the training and development of people, and how we support the results of our interventions. Our faculty comprises musicians, historians, psychologists, philosophers, actors, poets and marketers. It was a dream when I started it, and it still is.

We are still only at the beginning of our mission. We believe that many will join us on the journey. Already The Corporate Theatre has changed beyond recognition in the course of a couple of years, with a strong economic performance and a very clear definition of its offer.

The growth of our faculty and partnership has led to an exponential increase in ideas, methodology, and sheer ability to do what we have set out to do.

And what about the art in your own life?
Well, sometimes I feel like the man in the film ‘Mr Holland’s Opus’, who wanted to write a great symphony, but kept being diverted by his teaching. In the end, he realised that his ‘symphony’ consisted of all the people whose lives he had transformed.

There’s no doubt that this intense desire to create connections between artists and non-artists has probably been the most important thing in my life. It absorbs me.

I am currently writing a book on inspiration. There are some unfinished projects in music which nag away at me, and I hope to find time for them. And I am making a garden in Andalucia.